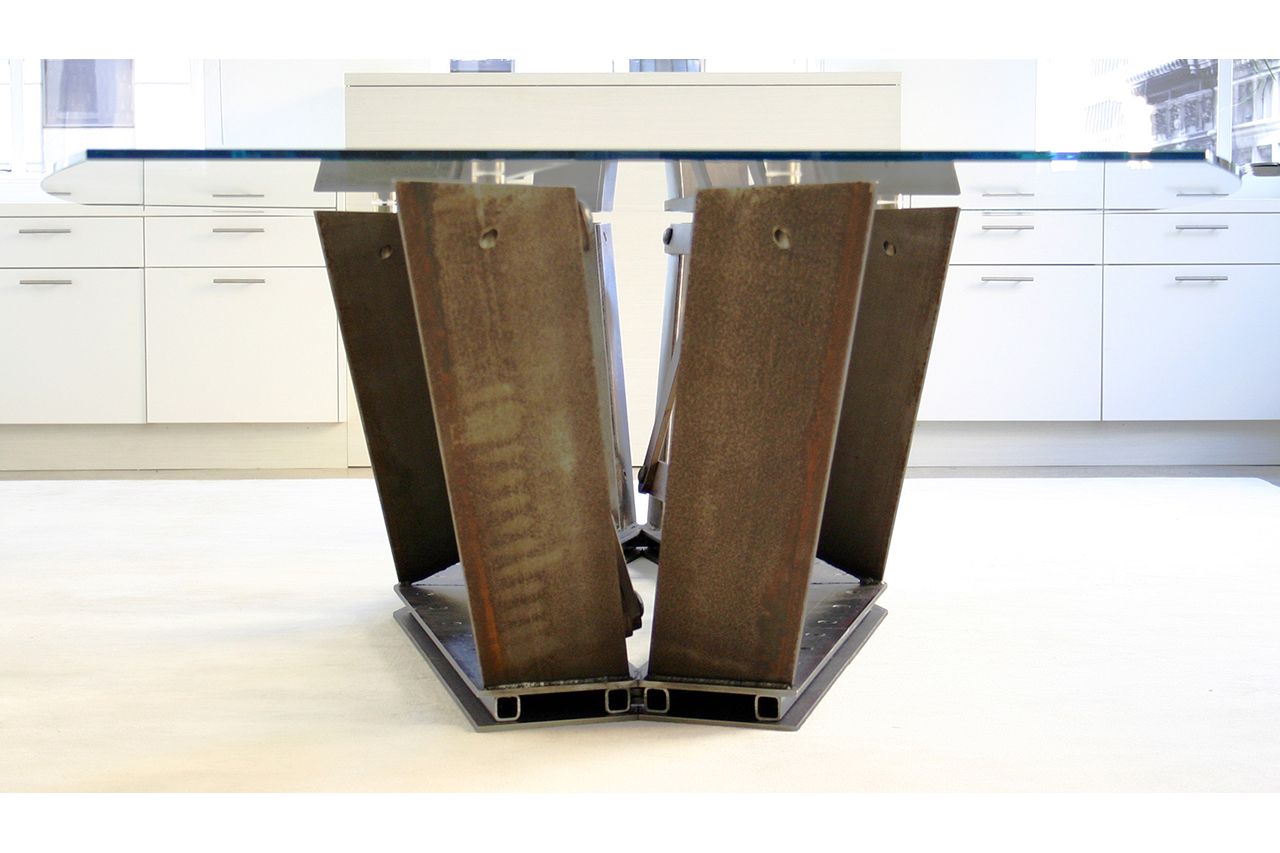 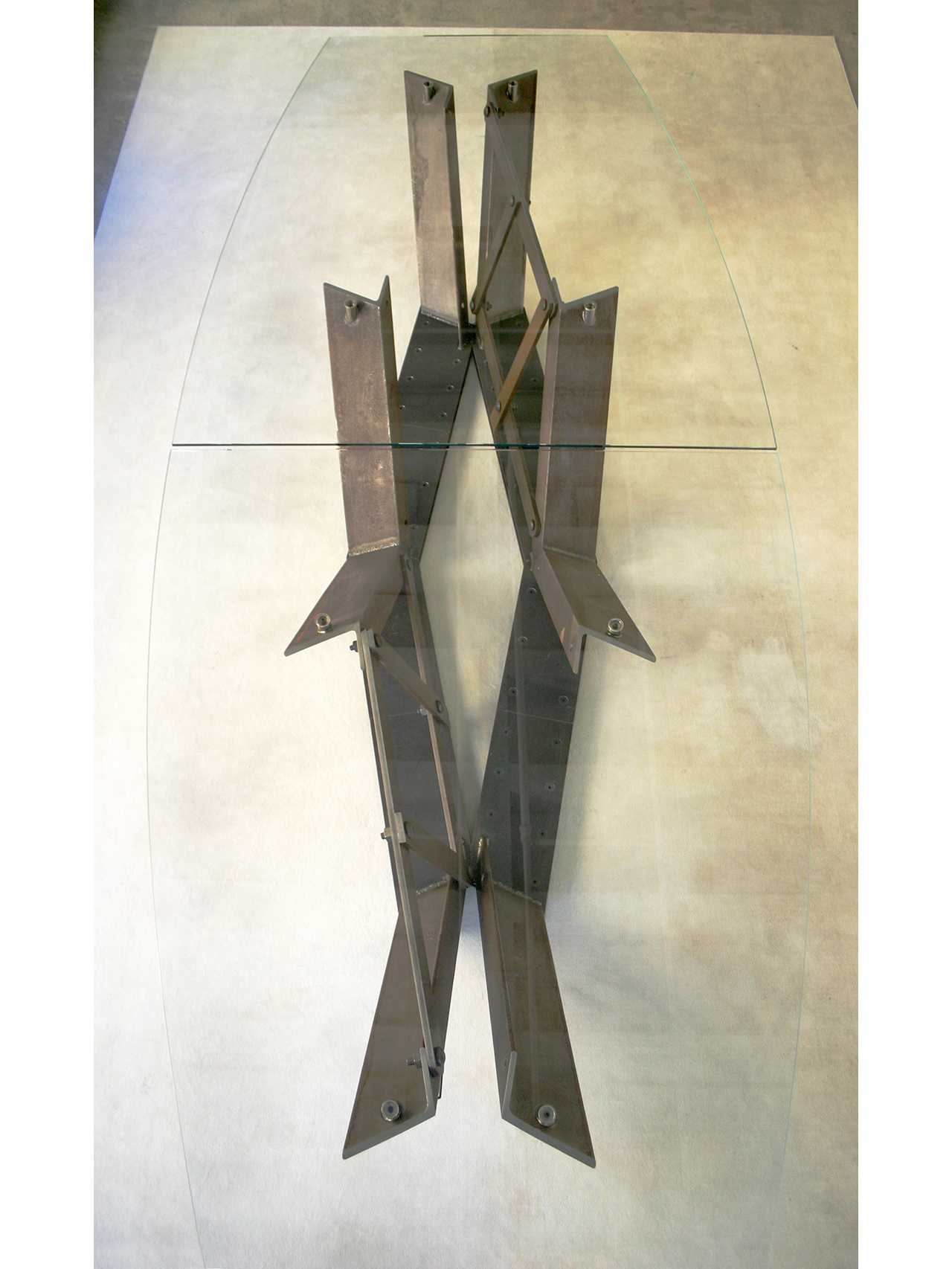 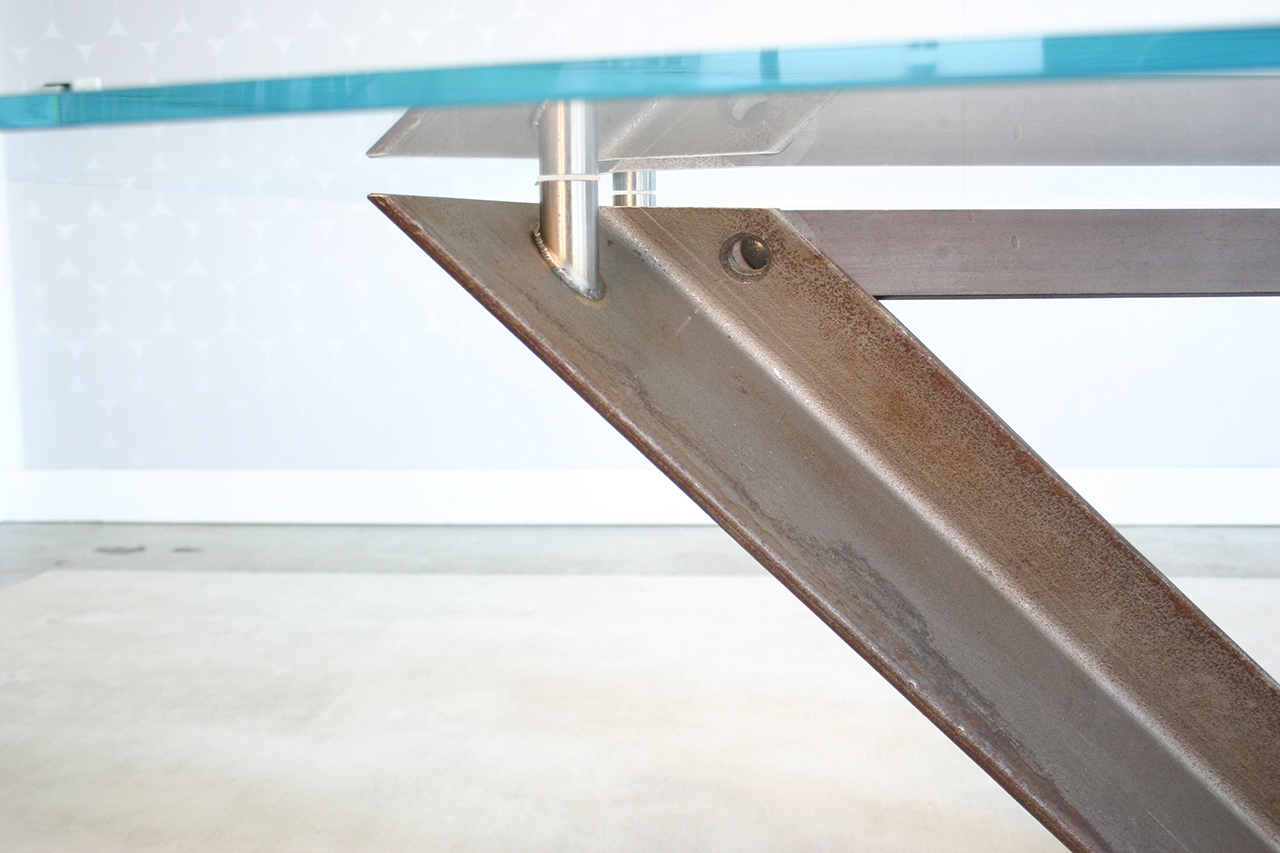 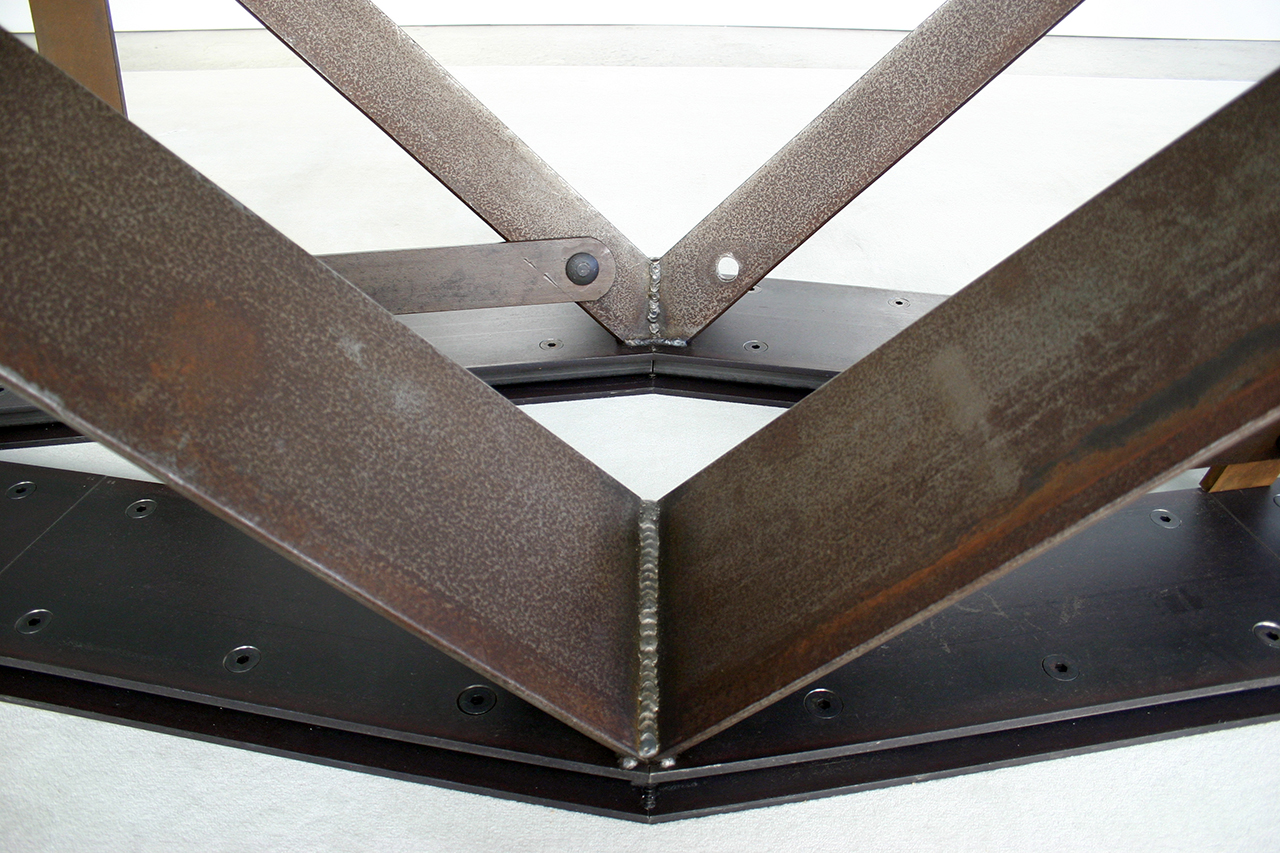 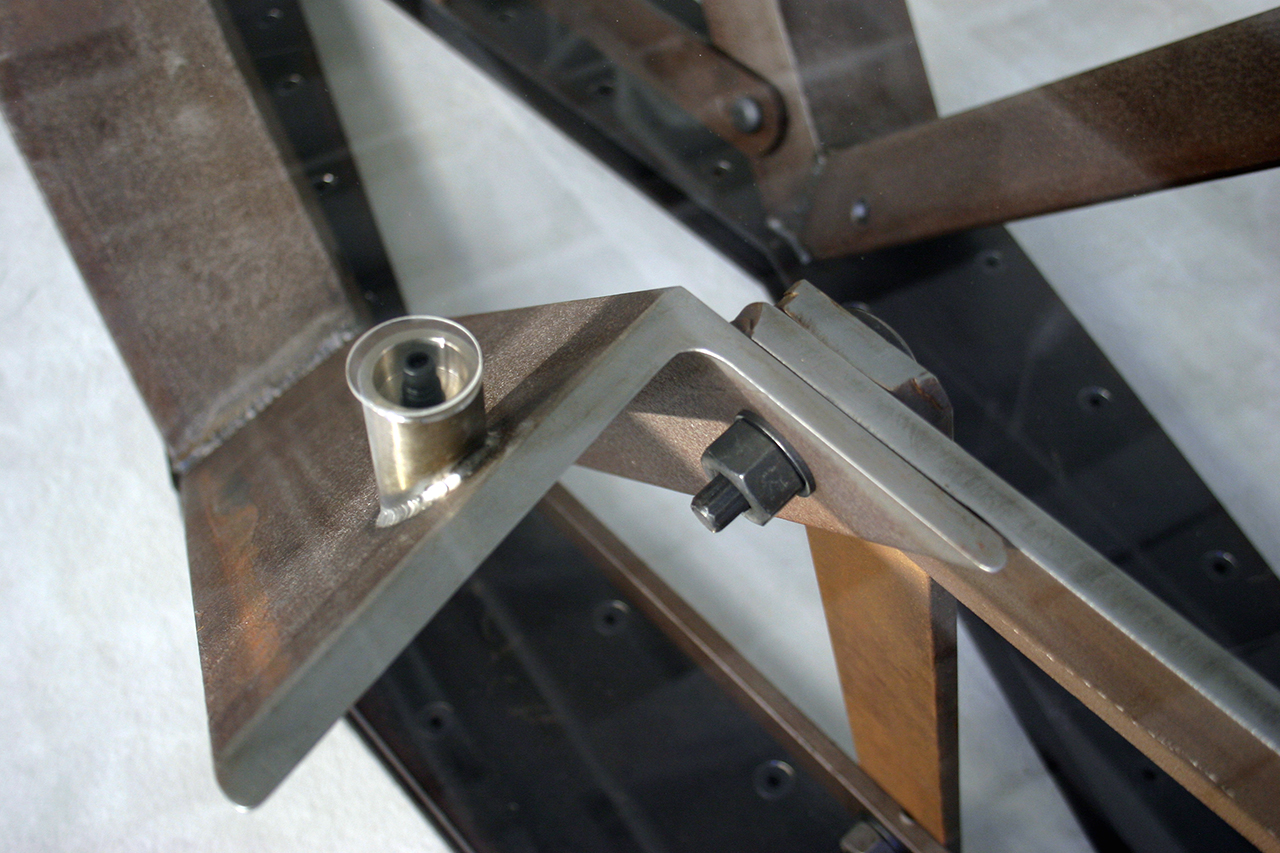 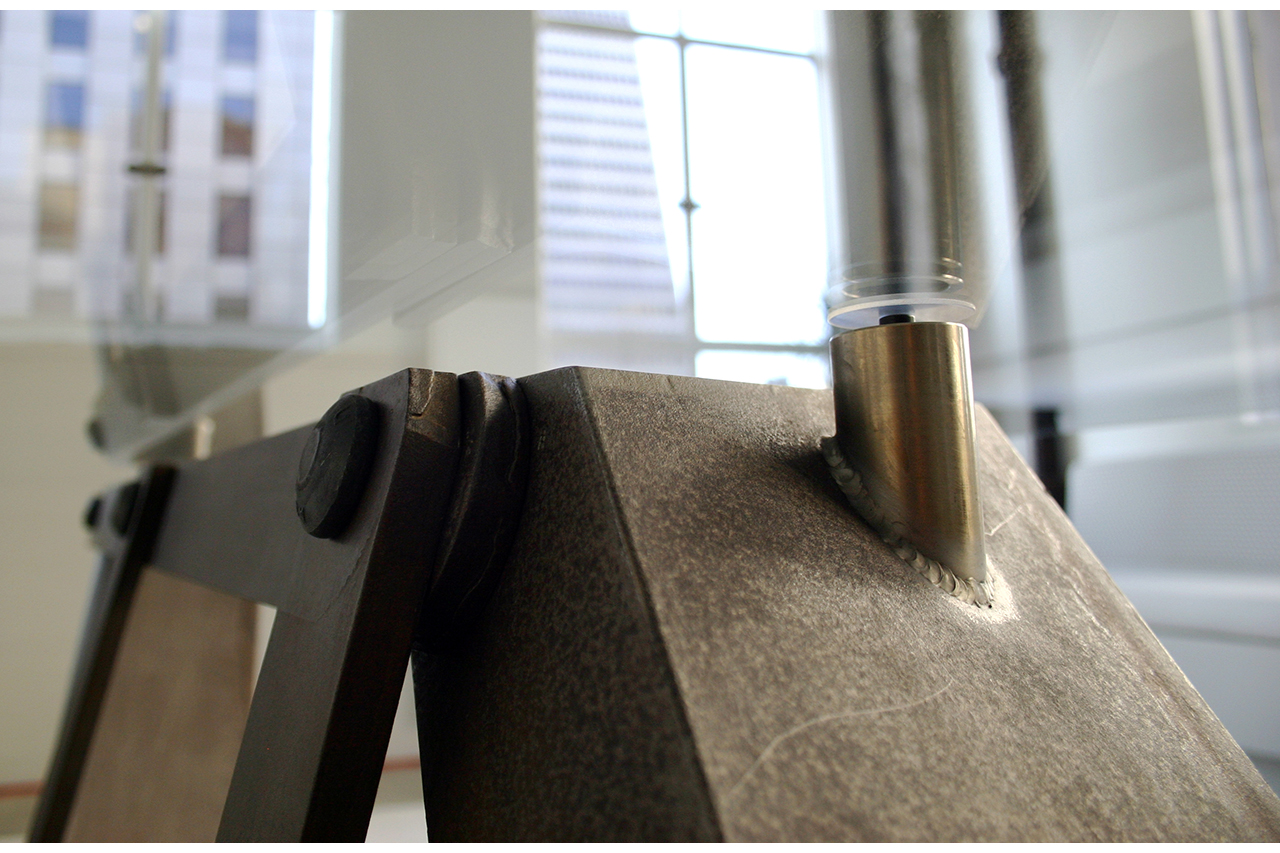 The San Francisco-Oakland Bay Bridge
After nearly 77 years serving trains (until 1967), trucks, and automobiles (up to 240,000 per day by 2013), the eastern span of the San Francisco-Oakland Bay Bridge (known locally as the Bay Bridge), was closed to traffic and replaced by a new span. The 1,400 foot long, 40 million pound cantilever span (the longest in the United States and 3rd longest in the world) began the long process of being disassembled, and an esteemed colleague had the acumen to rescue several beautiful lattice beams that had served as wind-bracing underneath the road decking. A small, 1,800 pound section of one of these beams serves as the conference table for Revel Architecture and Design (www.revelers.com) in downtown San Francisco.
Design
The design concept is simple: begin with the existing form of the riveted steel beam as it lived for 76 years (abated of its lead paint coating – sandblasted to bare metal); cut it in two and tilt the halves into a V shape; pry the flanges and lattice web slightly apart to provide a wider top; slice it for the horizontal surfaces; and weld it back together again. With a simple finish of wax on the raw steel and a clean glass top, the result is a breathtaking homage to the original – bold and iconic in its own right.

The original form followed the initial function. Embodying a reverence for the original shape, the new function inspired a minimal trans-form-mation – a deconstructed evolution composed of heavy steel profiles dynamically cantilevering in all directions. The delicate glass top serves as a counterpoint to the massive steel while ensuring that the power of the base remains manifest – one-of-a-kind monumental badass.

Gratitude
This piece was an opportunity of a lifetime, and I would like to give overwhelming gratitude and appreciation to my friend Daniel (who has been building furniture with salvaged bridge metal for years), who had the chutzpah to get his hands on this treasure, and who provided the encouragement to do something spectacular with it. Immeasurable indebtedness is also due to Gary, without whose patronage this idea would have remained a little cardboard model on my desk for who-knows-how-long.

Thank you both – straight from my heart.